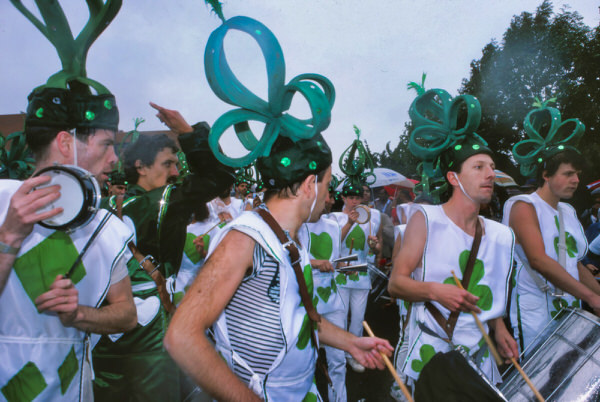 Ian Holmes Lewis obituary (1957 – 2021).  Ian was a pioneering sambista who played in three of the early London School of Samba Notting Hill Carnivals.

It is with sad hearts that we regret to announce the death of Ian Holmes Lewis.  He was a member of the London School of Samba and one of the first members of the highly influential Inner Sense Percussion Orchestra – the UK’s second samba group that was formed in Manchester in 1985. 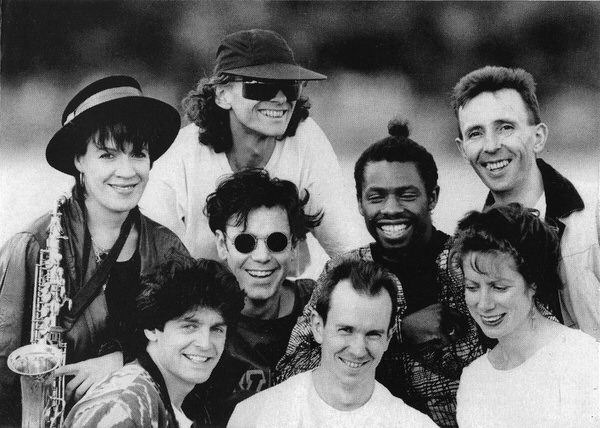 Inner Sense was a group inspired in their creation after seeing the London School of Samba at WOMAD in 1985. Like the LSS, they would help spread samba around the UK and inspire others to form their samba groups.

The group carried on until finally splitting around 2000, but Ian Holmes Lewis left sometime in the 1990s. Afterwards, he helped form the Manchester School of Samba with Tony Watt (another original Inner Sensemember). Following this, he later formed his own group Sambangra of which he was Musical Director.

I’d always been fascinated by Inner Sense – as I first saw them in 1992 when the London School of Samba didn’t do the Notting Hill Carnival and opted to go and play the Edinburgh Festival instead (19th-25th August 1992).  We literally turned a corner one day on Edinburgh’s winding streets on the way back from a little gig in a yard behind a shop when suddenly we found Inner Sense playing on the street too.

Our little bateria led by Dave Willetts immediately went over and there was this magical 10 minutes of so when LSS and Inner Sense played together. I think it was then that Dave mentioned to me that Inner Sense has played with us at the Notting Hill Carnival. In 1994 someone passed onto me their highly recommended album called “Sambadrome” and that was a big inspiration for me.

In the late 1990s, I noticed Ian Holmes Lewis was a regular contributor to the now-defunct UK Sambistas email list. I contacted him as I was writing the history of the London School of Samba and wanted to research the links between Inner Sense and the LSS in our early years – and how exactly our two groups had become connected.

Ian Holmes Lewis said, “In either 1984 or 1985 Colin Seddon and Chris Davies, set up Inner Sense Percussion Workshop, meeting at Colin’s flat in Windsor Road, Manchester. My understanding is that after the decision to form the project, and shortly before its first rehearsal, Chris Davies saw the LSS performing on a beach at the 1985 Womad festival and Inner Sense‘s fascination with samba was born.

As far as I know, we never heard of anyone else playing samba batucada at that time (apart from the London School of Samba). We had a core of members by the end of the Inner Sense Percussion Workshop phase. The personnel I recall were Colin Seddon, Chris Davies, Eddie Sherwood, Alan Hempsall, Jan Dzaran, Juliet Vinçon, Sue Ferner, Elaine Robinson, Tony Watt, and me – in no particular order.”

The London School of Sama had played for the first time at WOMAD on the weekend of 19-21st July 1985 at the WOMAD festival in Mersea Island, near Colchester, Essex, with a bateria led by Pato Fuentes. Colin Seddon said of this gig in 2021: “I was wandering around the site with a large container of scrumpy and found myself encircled by London School of Samba drummers. It blew my mind and was a turning point.

I returned to Manchester and, having been experimenting with funk, jazz, Ghanaian rhythms and a Sun Ra vibe, never the same line up from one gig to the next, the samba thing completed the puzzle. From this grew Inner Sense Percussion Orchestra and the rest is….”

At that point in the school’s history, anyone playing with the London School of Samba at the Notting Hill Carnival had to become a paid member. When I found the original membership lists back in 2001, I eventually established that Inner Sense must have contacted LSS almost straight away following WOMAD and arranged to take part in the 1986 Notting Hill Carnival.

Inner Sense drove down from Manchester

The following year two more Inner Sense drummers became members of the LSS and joined us in the 1987 Notting Hill Carnival: Alan Hempsall and Liz Faunce. Thus Inner Sense contributed to this historical parade of the LSS: the 1986 NHC was the first time the school won the Notting Hill Carnival, and afterwards, the Arts Council presented us a trophy for our victory. The school would have to wait until 2017 until it achieved this
again.

Ian played three carnivals with the London School of Samba

Ian Holmes Lewis told me in 2006: “Colin became good mates with Alan Hayman, but I recall most of our liaison being with Pato . . . We did three Notting Hills with LSS. The first year the samba enredo was based on Alice in Wonderland (1986) – this was the occasion it rained spectacularly for most of the route. It seemed like we were processing through a constant torrent of big fat, tightly packed raindrops, like marrowfat peas. Utterly glorious! Water splashing off the surdos and snares, droplets spinning off the tamborims. Everybody’s faces were dripping with smiles.”

“My strongest memories of playing with LSS at the Notting Hill Carnival were little samba-jams breaking out like bushfires before and after the procession. As sambistas were a rare breed in those days, the notion of playing spontaneous samba with total strangers was a unique delight, and I couldn’t get enough. These magical moments were made all the sweeter because they seemed to be a little rebellion against the authority of the Mestres (Bosco & Pato). With hindsight, it must have been a kind of hell for anyone trying to organise.” (quote from Ian Holmes Lewis)

At least one Inner Sense member called Susan Ferner continued the link with the LSS as I remember her playing a couple of parades with the school in the 1990s. Furthermore, the Manchester School of Samba led by Tony Watt also began to parade in the Notting Hill Carnival. I remember them visiting our barracão several times at Maxilla Gardens.

Ian became a member of LSS Ala Velaha Guarda

Because of this connection with the early LSS, when I set up the Ala Velha Guarda in 2009, any Inner Sense members who took part in any of our first five parades were automatically entitled to be members of this Ala. As a result, Ian, Colin and Tony became members.

Ian was highly influential in spreading the love of Samba

As with other original members of Inner Sense, Ian was one of the early pioneers of samba in the UK and consequently was hugely influential in spreading samba around the northeast of England and inspiring the creation of samba groups where none had existed before. Colin said that between 1985 and 2001, he’d worked out that about 80 people had passed through Inner Sense between 1985 and 2001. Inner Sense briefly reunited in 2013 to play at the Band on the Wall in Manchester. After Ian died in December 2021, tributes flowed in from around the UK:

Tribute to Alan from Isobel Wren

Ian will always be remembered with much love and affection in the Manchester samba community. (Isobel Wren)

Influenced so many lives – Colin Daimond

Ian had such a great influence in so many people’s lives; he will be remembered not just intellectually but will live on as part of the makeup of people’s outlook, character, and artistic expression. (Colin Daimond)

Music brings us together

Music brings us together in so many ways. Rhythm is so powerful, and Ian was an inventor and communicator who helped fire the energy of so many here in the North West. (Peter Moser)

The LSS will remember Ian  as one of our early members – like so many of the original Inner Sense Percussion Orchestra.  We will remember him as one of those who were there when the LSS did some of its first parades and for his help and contribution in parading with the London School of Samba at Notting Hill Carnival.