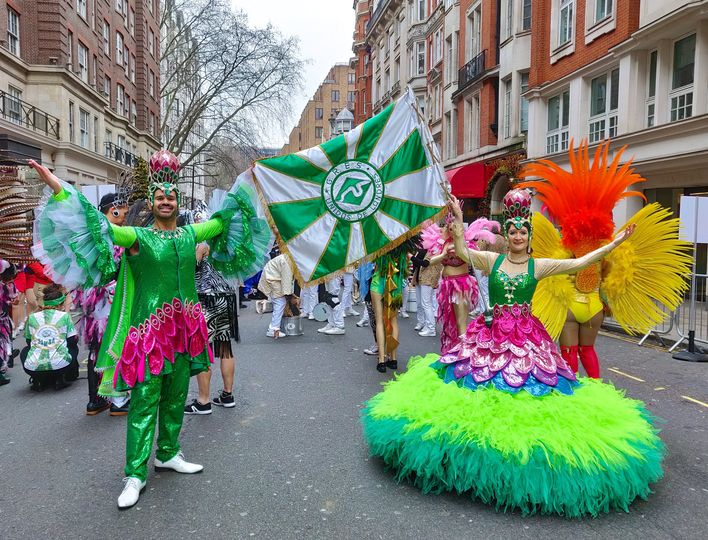 Our Mestre-Sala and Porta-Bandeira, Marcelo dos Santos and Davina Greeves, have been invited to represent London School of Samba in the Unidos de Bangu parade in the 2022 Rio de Janeiro Carnival. Davina and Marcelo will parade as the ‘3rd couple’ of Unidos de Bangu under the Enredo “Deu Castor na cabeça”, an homage to Castor de Andrade.

Castor de Andrade was linked to Unidos de Bangu via Bangu Atlético Football Club. Castor was an advocate of the people’s culture, and Samba in particular, during the difficult years of dictatorship in Brazil. He was one of the former patrons and president of Rio’s Mocidade samba school, LSS’s ‘godmother’ school. He also founded LIESA, the Independent League of the Samba Schools of Rio de Janeiro in 1984, the same year LSS was established as London’s first Samba school.

Orquidea Lima, LSS Dance instructor and organiser of this project, said: “This is great news for our School and we are delighted that LSS has been chosen to represent the legacy of Castor de Andrade in the person of Marcelo and Davina! I’m certain that our 1st Mestre-Sala & Porta-Bandeira will make us proud at this very prestigious role in the Unidos de Bangu parade next year.”

The Mestre-Sala and Porta-Bandeira (master of ceremonies and flag-bearer) are the most important dancers in a Samba school as they hold and present the school’s flag, the ‘sacred’ symbol of the school’s identity! Their dance is dignified, courtly and balletic, featuring bows, curtseys, turning and engaging with each other and the spectators. The origin of this dance goes back to the European courts and ballrooms of the 17th and 18th centuries.

Interestingly, the Mestre-Sala & Porta-Bandeira are the only dancers in the Samba school that do not do samba no pé. In fact, they will lose the school points if they do samba no pé during the parade, and they can never turn their backs on each other. The Mestre-Sala’s role is to protect and court the Porta-Bandeira. She is the guardian of the flag, and must never let it drop, wrap around its pole or touch her body. In Rio, São Paulo, Notting Hill and many other carnivals around the world, the couples present themselves to the judges, who evaluate the dance, costume and concept.

Unidos de Bangu is a Samba school based in the neighbourhood of Bangu, Rio de Janeiro and it was founded in 1937, being the first samba school of Zona Oeste (the western suburb of Rio). Despite not being recognised officially, it is locally accepted that Unidos de Bangu is one of the godmothers of Mocidade, and thus an informal ‘grandmother’ to LSS.

Mocidade Independente de Padre Miguel was founded in 1955 in the Padre Miguel district of Rio’s Zona Oeste. Castor de Andrade was the school’s patron over two decades until his passing in 1997, and under his leadership Mocidade won the Rio Carnival title five times. In 1984, President de Andrade gave his blessing for Mocidade to become the Madrinha or ‘godmother’ school to the newly founded London School of Samba, the UK’s first samba school. A large delegation of dancers and Bateria from Mocidade visited London in 1989 to perform at the 3rd European Samba Encontro and formally adopt the London School of Samba.