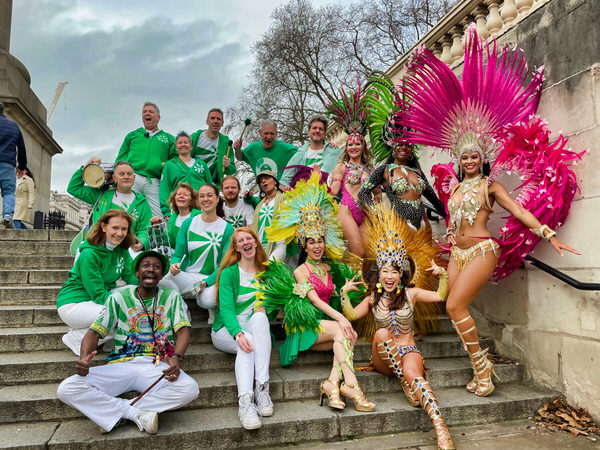 One of the world’s great street spectaculars in the heart of London!

Classed as the biggest New Year’s Day Parade street event of its kind!

The London School of Samba hit the headlines for all the right reasons at London’s famous New Year’s Day Parade, as mild mid-winter temperatures reached a record 16C!

The London School of Samba Show Band performance was broadcasted on London Live, American Public Television and more than 250 other TV stations worldwide!

Fantastic Media coverage for the London School of Samba 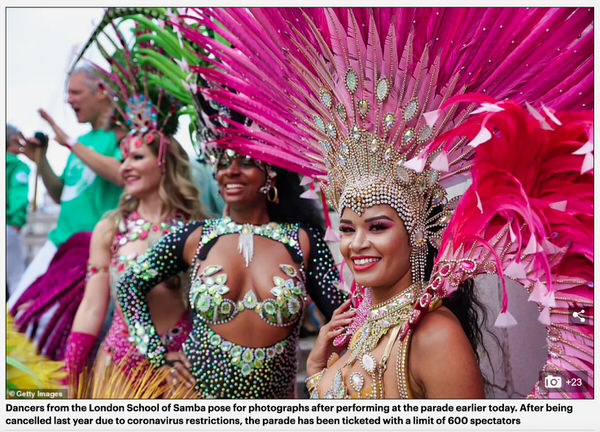 The London Schoo of Samba New Year’s Day Parade went off with a bang after our crowd-pleasing performance!  Just about everyone from the national newspapers was taking photos of the band and our dancers who lit up the LNYDP show.

The next day, media coverage for LSS included the BBC, a massive photo on the front page of the Sunday Telegraph, The Independent, and various other national newspapers. Here are some links to the articles from the press mentioning the London School of Samba Show Band. 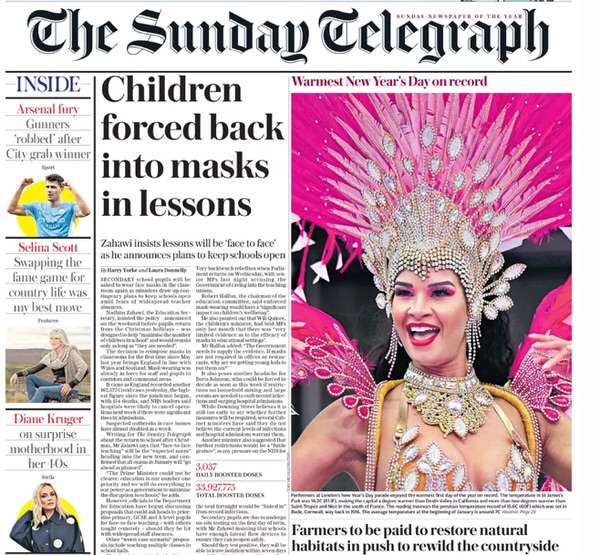 One of the great things about joining our Samba dance classes in London is the opportunity to progress.  You can start off as a beginners samba dancer and then over time develop and improve.

With the encouragement of our fantastic samba dance teachers, you will quickly improve and get the hang of the basics.  Over time and with dedication you can move to the intermediate class and then had an opportunity to perform with our Samba showband!

After a fantastic performance, let go and teach some Samba! 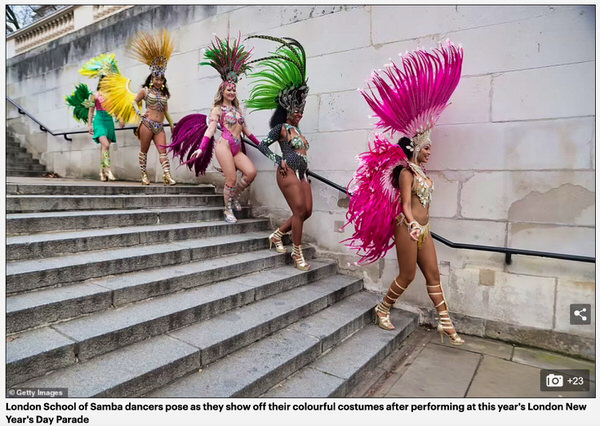 Our weekly samba dance classes are on Sundays at WAC Centre 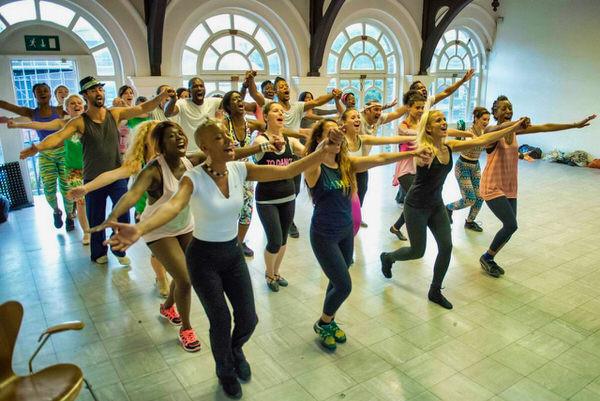 The Samba Show Band had a lot of fun! 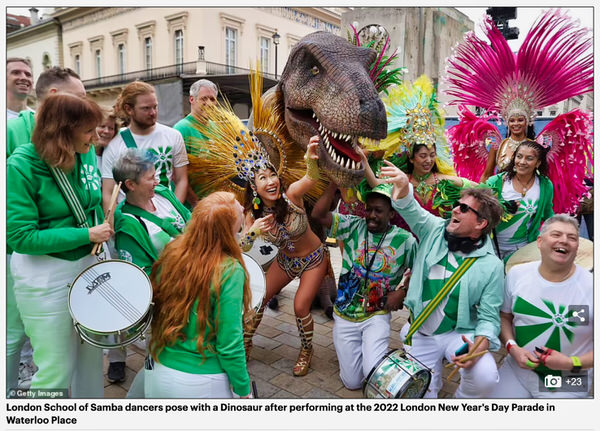 The London School of Samba Bateria Director Mestre Fred Turuka said: “It was fabulous to get 2022 off to such an amazing start at the New Year Day Parade.  The drummers and dancers were all amazing, and we are looking forward to a great year!” 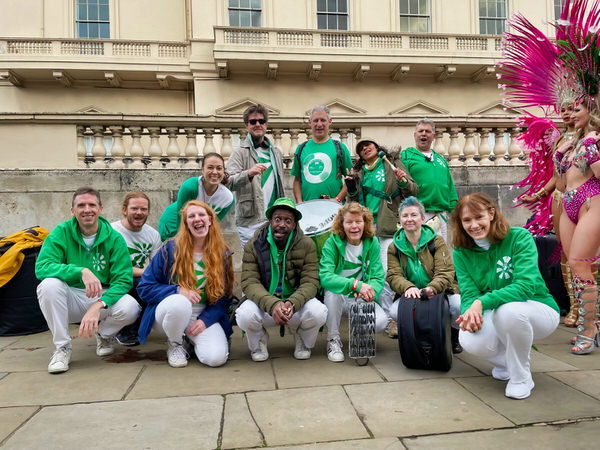 No Previous musical experience is needed!

No previous musical experience is necessary. You don’t need to read music! You will be with other brand new beginners and not with advanced players struggling to understand what is going on.

The London School of Samba is always here to welcome brand new members or complete beginners to our Bateria or samba drumming classes every Sunday in London. Don’t worry about your level of experience; come on down and join in the fun!

Details of our next samba drumming classes in London can be found by checking our samba classes timetable. There is no commitment to come every week and come along and try it out! Here is the link to book your place on the next available samba drumming class with the London School of Samba.

The giant green and white London School of Samba flag was carried by our ‘Porta-Bandeira’ flag bearer, Davina Greeves, and Darren Gian as ‘Mestre-Sala’ or master of ceremonies.

These are the most important dancers in a Samba school as they hold and present the school’s flag. Their dance was dignified, courtly and balletic, engaging with each other and the spectators.

Davina and lead Mestre-Sala Marcelo dos Santos have been invited to represent the London School of Samba in the Unidos de Bangu parade in the 2022 Rio de Janeiro Carnival next month. However, it may be postponed to 2023. 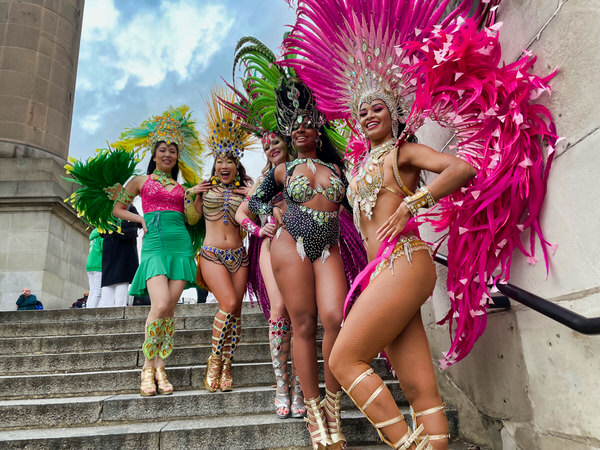 The London New Year Day Parade takes place every January 1st right in the heart of London! It is one of the world’s great street spectaculars, and is classed as the biggest New Year’s Day street event of its kind!  The London School of Samba have performed five times and we love supporting this amazing event.

London’s New Year’s Day Parade launched in 1987 and instantly became a worldwide success!  It has attracted people from all over the world and everyone comes together in unity to celebrate the start of the new year.  Approximately 650,000 spectators took to the streets for the New Year’s Day Parade in 2020.

One of the reasons for this incredible parade is to raise funds for various charities in London.  For this reason, the London School of Samba proudly supports this amazing event in the heart of London!

Each year all the London boroughs compete for charity prizes.  This tradition started back in 1997 when each London borough was asked to represent the cultural diversity of the people and places in their borough.  Over the years the New Year’s Day Parade has raised ‘the best part of £2 million’ for local charities.

The London School of Samba is a fun place to learn how to dance Samba!  Now is the time to contact us to book your classes. We offer two fantastic beginners level classes to get you started on your samba journey.  The most popular dance class we run is our beginners Samba dance class in London sessions.  These are super fun and a great way to learn how to samba!