1974-79: Harold Wilson’s Labour Government grants political asylum to thousands of Chileans – some 4000 altogether of whom end up coming to the UK. They were forced to flee Chile following the bloody coup in 1973 that brought the US-backed dictator General Pinochet to power. Wilson’s government also gave political asylum to many other people whose countries were taken over or run by Military governments is this period – especially Brasilians, Argentineans, Colombians and South Africans. The arrival of such a large number of mainly Latin American citizens fleeing political persecution is the primary catalyst for the emergence of both Samba and Salsa in the UK.

1975/1976 Latin Percussionist Robin Jones has a small Samba group that played at the Lewisham Carnival. This group was with a “few people he was teaching in the UK”, including a Brasilian percussionist called Luis Jardin. There were no dancers in this group. They had also done an earlier performance at the Lord Mayor’s Show, but this was “not of any consequence”. They played Samba from a small float in a parade with a few ritmistas.

1976: The show Brasil Tropical appears at the Sadlers Wells theatre in London. According to Robin Jones, this was the “first Samba event in the UK”. The show was mainly a Baianas performance with ritmistas, but it
was the first time “that people in the UK saw or heard Samba”. Robin observed that “people became aware of something they had never seen before”.

1976: First major Latin Act to perform in the UK, the Fania All Stars, performs at London’s Lyceum with Stevie Winwood guesting on vocals.

1979: Robin Jones meets João Bosco de Oliveira (who had arrived from Brasil in 1978). This was when the show Brasil Tropical came back to London. The show had a performing group of some 40 Brasilians – but
wanted more and decided to contact as many known Brazilian musicians in London. It would bring many people together, such as Bosco and Robin, who would, later on, form the first Samba School in the UK, the London School of Samba.

1979: Roberta Pla, who arrived in the UK from Colombia in the same year, forms the first Salsa group in the UK, Valdez. He is also later one of the first members of the LSS. Pla said: “What we’re living now would have been a fantasy back then . . . . when l arrived in 1979, there were no venues, no Latin bands and no audiences for them.”

1979: Robin Jones asked to produce a new show in London called Carnival Brasil. He asks Bosco to be the Musical Director. They went to France and played in the Fairfield Halls.

1980: In August Carnival Brasil play at the Notting Hill Carnival – becoming the first samba band to do so, But it was a small band – just 10 drummers and 8-10 dancers. Robin Jones was interviewed at 1980
Carnival by Globo TV. Robin is joined by Bosco and other early sambistas in the UK. I suggested to Robin many years later that this was a historical event, and he said that someone had said that to him at the time. Carnival Brasil went on to perform other gigs, such as the Finchley Carnival (1981) and Enfield Carnival (1982). The group disbanded in 1983.

The beginning of the 1980s saw an upsurge of both Samba and Salsa in the UK. Some of this was fuelled by Cuban jazz at Ronnie Scott’s club in Soho and Latin nights at a new venue, the Bass Clef in Coronet Street,
near Old Street in London, N1. Jazz bassist Peter Ind founded the club. Pla said: “The Bass Clef is the venue we have to be grateful for – that was the platform.”.

Samba was getting well established in mainland Europe by this time: three other Samba Schools were also formed before the arrival of the LSS in the UK in January 1984:

1983: Alan Hayman begins searching for interested people to from a Samba School in London. He approaches Bosco at a gig in the Rockgarden, Covent Garden, asks him if he wants the Mestre for the first Samba School to be set up in the UK.

The LSS played their first gig in Covent Garden in April 1984. By 1986, over 500 drummers have performed with the School. LSS starts to perform all over the UK, inspiring groups such as the Inner Sense Percussion Orchestra.

1984: The LSS become the first Samba School to perform at the Notting Hill Carnival with the theme and enredo called “Homage to Mocidade and Padre Miguel”. The Schools parades with around 50 drummers and 50 dancers in all Alas led by Celia Emony (Porta Bandeira), Paulo Correa (Mestre Sala). The bateria is directed by João Bosco de Oliveira (Mestre da Bateria) with Shedar Baba (Puxador) and Marcelo “Tein” Ruas (Cavaco).  Here is list of the London School of Samba appearances at Notting Hill Carnival over the years.

1985: First official recording of any Samba recording in the UK with the release of “Live at the Bass Clef” with one track by the LSS called “Batucada”.

1985: Around this time, South African exiles Alan Hayman and Steve Kitson and Chilean exile Pato Fuentes form the first political protest samba band – Batucada Mandela. They begin playing to support the nonstop 24h picket of the South African embassy in support of the ANC and the dismantling of apartheid.

August 1986: LSS win the Notting Hill Carnival for the first time. 1st European Samba Encontro in Uppsala, Sweden – organised by (amongst others) Åke Persson. Attended by many Swedish and Finnish Schools and
the LSS led by Pato Fuentes.

August 1987: 2nd European Samba Encontro in Turku, Finland. Attended by many Swedish and Finnish Schools and the LSS.

1988: Formation of Aquarela in Paris, France. Formation of Escola de Samba Macunaima in 1988 in Bordeaux, France. LSS performs in Edinburgh, Scotland for the first time. MacUmba was formed in Glasgow,
Scotland.

July 1989: 3rd European Samba Encontro on the Southbank, London. Organised by Alan Hayman and the LSS. Attended by many European
Samba Schools and from Brazil, Mocidade, the godmother of the LSS.

Late 1980s: Formation of the first “political” samba group, Batucada Mandela. This new group was an offshoot of two other groups: The Inner London AntiApartheid Association and the Bateria of the LSS. Pato Fuentes, Alan Hayman and Steve Kitson were some of the main organisers of this group which played periodically for the release of Nelson Mandela outside the South African Embassy in Trafalgar Square.

March 1990: Batucada Mandela plays on the Poll Tax march in London. The group continues to perform until the late 1990s (such as the London
Dockers march in 1997).

May 1990: 1st UK Samba Encontro in Lincoln attended by the LSS, Inner Sense Percussion and a small number of other groups.

1990: Formation of Bloco do Sul in Dorking by Mick Pyke and Sambuka in Hemel Hempstead by Bob Garland. Formation of Samba Galez in Wales.
LSS come third in the Notting Hill Carnival.

1991: Olodum perform for the first time in the UK with the LSS at Richmond Park. They also parade in the Notting Hill Carnival with the first Bloco Afro in the UK – Afro Bloc – who do their first and only parade in this carnival.

September 1991: Formation of Quilombo do Samba (Gremio Recreativo Bloco Carnavalesco Quilombo do Samba) by Jimmy Rodrigues, who left the LSS that year. Also, a founder member of this group was another ex-LSS member, Tony Spiker. Joe Hanson (formerly of the Bristol School of Samba) would later by the Mestre of this group for five years. Also, a ritmista in this group is Giselle Winston, also ex-Bristol School of Samba.
Quilombo first paraded in the Notting Hill Carnival in 1993.

1992: Formation of Escola de Samba Acadêmicos de Madureira by Alan Hayman. They parade every year at the Notting Hill Carnival until 1995, when Alan returns to Brazil. One of their dancers was Henrique da Silva –
would later join the LSS before forming Paraiso in 2001. The Bateria director was Xavier Osmir – later Puxadore with the LSS.

1992: Formation of Arco Iris in Cambridge with help from Dave Willetts, the Mestre of the LSS.

1993: Formation of the Nottingham School of Samba by Tom Kemp from the LSS.

1996: Formation of the Barking Bateria by Chris Knight and Lionel Sims – two drummers from the LSS who Batucada had greatly inspired
Mandela on the Poll Tax March. A later offshoot of this group would by Rhythms of Resistance.

1996: Arrival of Mestre Esteves in London with members of Estacio de Se – he gives workshops for Quilombo and the LSS.

1996: Formation of Samba ya Bamba in Glasgow, Scotland in October

1997: Formation of the Liverpool Samba School.

1999: London School of Samba play at the Millennium Dome on New Years 2000 in front of the Queen and Prime Minister Tony Blair.

2001: First visit by the LSS to the International Samba Festival in Coburg.

2002: Formation of the Paraiso School of Samba by Henrique da Silva and his brother Mestre Esteves.

2003: Bloco Liberdade – the successor group to Batucada Mandela – join the 1 million people demonstrating against the illegal war in Iraq with
over 100 drummers.

2005: Paraiso School of Samba win the Notting Hill Carnival for the first time.

2014: Paraiso School of Samba win the Notting Hill Carnival for the second time.

2016: Batala wins the Notting Hill Carnival for the first time.

2017: London School of Samba win the Notting Hill Carnival for the second time. 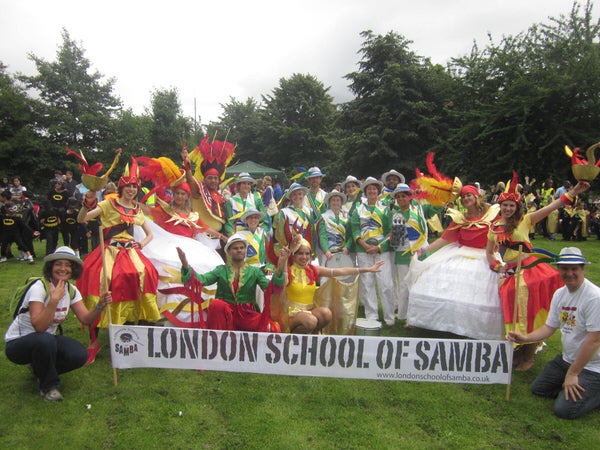 Mestre Mags is constantly updating his history of Samba in the UK webpage and off line documents.  If we have missed something out or you have some more useful info to share, we would love to hear from you.  You can contact us by send us an email to our samba history team at [email protected].  We look forwards to hearing from you soon. 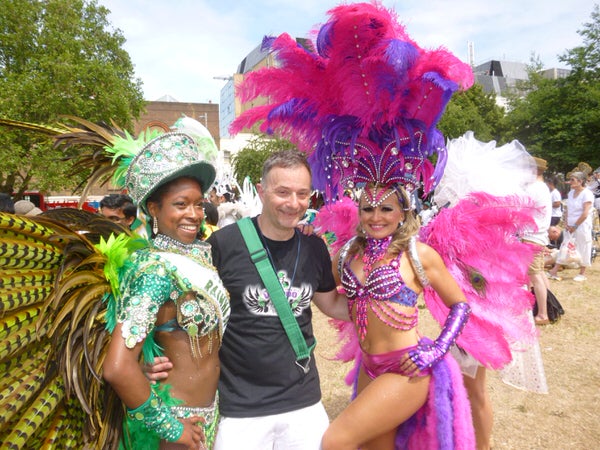 The London School of Samba have performed at many festivals, parades and of course the world famous Notting Hill Carnivals over the years. If you would like to join one our exciting samba dance classes in London, then contact us.  Our beginners samba drumming classes in London are a fun way to learn how to play music and make new friends. We love new members (especially beginners) and you don’t need to know how to dance or drum to join the London School of Samba!  All you need to do to contact us below and our friendly team will be in touch.