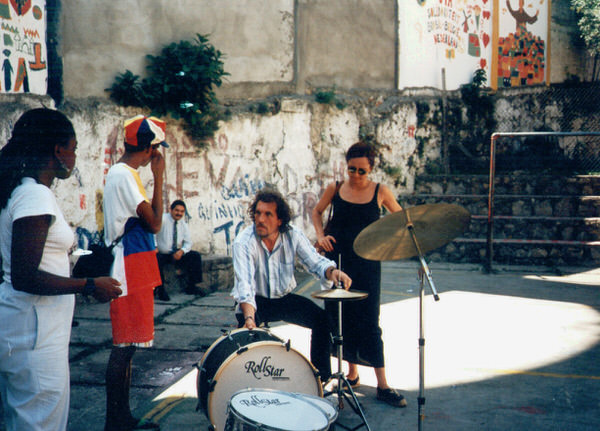 Jim Capaldi, ex-drummer of Traffic and friend of the London School of Samba dies aged 60. It has recently been announced that the world famous drummer Jim Capaldi has died. Born in 1944 in Evesham, UK, he was best known as the drummer for the legendary Traffic – the band he formed with Steve Winwood in 1967, who had hit singles such Paper Sun and Hole In My Shoe (1967). One of his obituaries in The Independent (UK) said that he considered Brazil his second home – he met his Brazilian wife Aninha Campos in 1975, and they married later that year, and had two children, Tabitha and Tallulah. The obituary also said that the couple “campaigned on behalf of various charities there”, including the São Martinho children’s project in Rio de Janeiro. Recently, Aninha accompanied Tony and Cherie Blair on a fact-finding mission of Rio. Aninha was also our Porta Bandeira in two of our parades in the Notting Hill Carnival (1994 & 1995) – and Di Foden (who died in 2011) remembered her well:

Lovely photo of Jim in Brazil 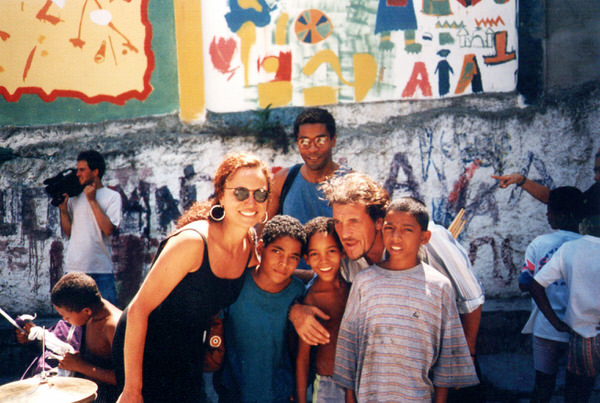 “Jim Capaldi was something of a background figure for me – a large and silent man with a face that bore the marks of a thousand gigs. I remember thinking that he looked exactly how an old rock star should. I mainly dealt with his lovely wife Anna, who turned up one year at Carnival in 1995 with a small entourage, a large dog, and an Emmanuel dress (the designers responsible for the Princess of Wales’ wedding dress, so a not inconsiderable piece of gear), and pronounced she would be our Porta Bandeira.

In inimitable Brazilian fashion she settled in for the weekend, sewed and chatted. The entourage and the dog did their best to look as if they understood. I remember particularly, late on the Sunday night when Anna had left, a gang of awestruck women standing drooling round the dress, stunned to silence by the loveliness of it.

I will never forget her dancing down Ladbroke Grove in this stunning dress. What a lovely woman. She was standing outside the gate last year to see us off on our 20th Anniversary parade in 2004.

My sympathy and love to her and her family.” 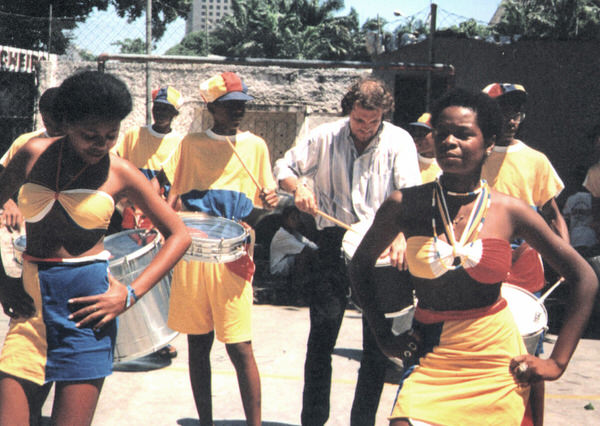 I think it’s likely that Jim came across Samba at an early stage of his career. After the military seized power in Brazil in 1965, it soon cracked down on anyone who opposed the regime. Musicians such as Gilberto Gil and Caetano Veloso were no exception and they were sent into exile – ending up in London in 1969. According to one biography l read, they spent three weeks in London hanging around with Jim and others such as Alan Watts and Yoko Ono. I guess it was through Jim’s friendship with Gil and Veloso that he first became interested in Brazilian music – either way by the mid-seventies he was in Brazil and it was there that he met his wife Aninha.

l remember the first time l met Jim was at a London School of Samba gig we did at a smart hotel in London sometime around 1994. The bateria was playing on stage led by Adrian Bond when l noticed a guy with a snare drum suddenly come up from the audience in the middle of the set and joined the front row of the bateria. A few of us looked at Adrian and then looked at this guy, not knowing who he was – although l looked at him and recognised him from somewhere but could not remember where. At the end of the set, we all paraded off stage to the area backstage, and when we stopped playing, l went up to him and shook his hand saying “I don’t know who you are – but l recognise you!”. He just laughed and later, when he left the dressing room, someone came up to me and said “that’s Jim Capaldi from Traffic!”.

The next time l saw him at an LSS gig was when in 1996 we did a special show at the Union Chapel in Islington which we recorded and intended to release as a live tape. I was on the door at one point and was amazed when suddenly he appeared and came in. He was very friendly and l was hoping that he would join us again on stage – but he spent the night watching us play and l never got the chance to talk to him again – although he also came down to join the party at our Barracão in Notting Hill after one of our Carnivals around this time.

It was around 1994 that the LSS first got involved with supporting the São Martinho children’s project in Rio de Janeiro (www.saomartinho.org.br), and as far as l remember, we helped fund the cost of teachers and the purchase of instruments to set up a children’s bateria for the project. The involvement of the LSS continued until around 2001, and during that time not only did we do several benefit gigs to support São Martinho, but many visits were also made by LSS members to its headquarters right beside the famous old tram viaduct at Lapa in Rio.

Jim was also involved and when some LSS members went over in 2000 to join the children’s bateria for the parade of the São Martinho carnival he was there helping out during rehearsals. I found several pictures in our archive showing Jim playing with the bateria of the São Martinho project in 2000.

We will always remember him as someone who was a good friend of the LSS, and a great supporter of the São Martinho project in Rio.