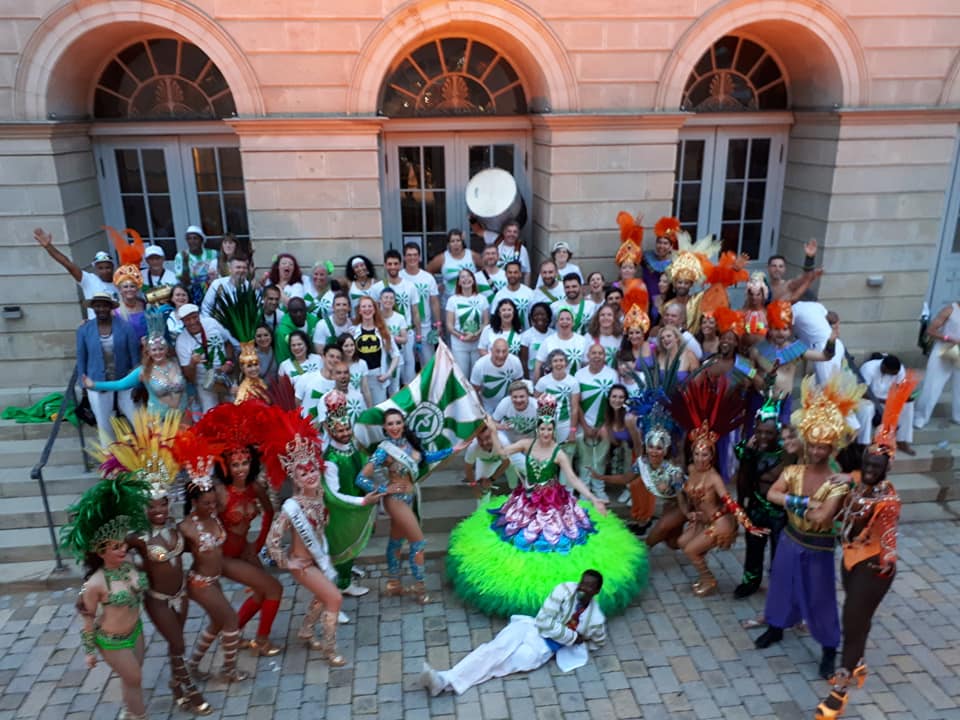 It is with great sadness that we report the passing of Dona Emilce. She was present at the beginning of the school in 1984 and was perhaps one of our biggest fans and supporters in our 30 year history. It was thus devastating for many in the School to hear the news that she had died two days before our historic 30th anniversary parade. As a tribute to her, many wore black armbands to remember her.

Her funeral was held at Golders Green Crematorium on 23rd September 2014. Attended by many members of the LSS, along with Mariana Whitehouse, I had the honour of placing on her coffin the flag of G.R.E.S. Unidos de Londres – as a tribute to one of our most honoured Velha Guarda.  To honour Dona Emilce, the School decided at the 2014 AGM to make her the Madrinha of the school for the year 2015-2016 – something I know she would have been greatly honoured by.Her spirit will be there with us in Carnival this year and I know will always be there for the LSS.

Di Foden was originally from Liverpool, and she became one of the most influential and important people in the history of the school. A tireless worker for the London School of Samba, she served for 17 years on the Management Committee (1988–2006).  She took part in a record 21 carnival parades with the LSS – playing every one the school did between 1988 and 2007, and then coming back after retirement in 2009 for our 25th anniversary parade, and then again in 2011 for her final one as Madrinha of the London School of Samba.

Di will be fondly remember as being a big part of the family here at the London School of Samba.  We sadness in our hearts, we heard the news that Di had passed away.  We have a page dedicated to her and you can read the Obituary for Di Foden.

The history of the London School of Samba

This page is currently work in progress at the moment.  Over time it will expand upon the history of the London School of Samba.  Here is a link to our historical carnival index archive page about LSS parading in the Notting Hill Carnival and other parade since 1984.

If you have any stories, photos or comments about any of these incredible women, we would love to hear from you. Here is the contact details for the London School of Samba and get in touch today to share your members of these amazing women. Please send your stories or photos to this email address: [email protected]