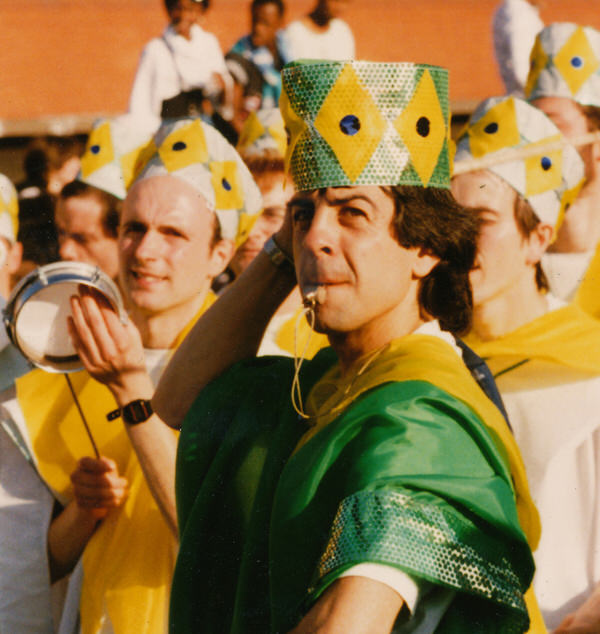 “A legendary Sambista and teacher in his own life time”
Pato Fuentes, one of the founding members of the London School of Samba
died on 1st April 2002. He was the Musical Director of the LSS from late
1986 until 1989. Born in Chile, along with his brother Carlos, he was
forced to flee the country after the US brought down the democratically
elected government of Salvador Allende and installed the Pinochet regime
in 1973. Like many other Chileans, they came to live in the UK in 1977 and
settled in London.

The early history of the London School of Samba

In October 2001, l spoke to Pato at his home in Camberwell about the early
history of the LSS. He told me that when Alan Hayman decided to form the
first Samba School in Britain in late 1983, some of it’s first members –
such as Gerry Hunt and Carlos, were also members of the now famous Grand
Union Orchestra.

He said that Alan had first asked Carlos and Gerry to
help form the London School of Samba along with Bosco de Oliveira, the schools first Musical
Director. He said that it was through Carlos, that he was first approached
to join the LSS in early 1984. He told me that the basic aim of the LSS was
to:

Bringing people together through music

First ever LSS Bateria rehearsal was in Hackney 1984

The first LSS Bateria rehearsal was at the house of Dawson Miller in
Hackney in the spring of 1984 with around 10-15 drummers, including
another Chilean exile, German Santana. According to Pato, this was very
informal, just a jam – bring your own instrument sort of thing.

Eventually, it was decided to find a proper rehearsal place and get
together more often. As a lot of the early members of the LSS lived in
Hackney area in east London, the first proper rehearsal centre was the
Jenako Arts Centre in Balls Pond Road in Hackney.

At first, the Bateria led by Bosco just concentrated on rehearsals and
getting a set together. When more people heard about it, they began to
receive offers to play local festivals. Around about June 1984, the
LSS started playing it’s first gigs. Pato told me that one he
remembered well was the first of several performances in Victoria Park in
Hackney (although when l spoke to the dancers, they were sure it was an
event in Covent Garden).

The gig was on a nice warm day, and when
some Brazilians who were there on a picnic heard the drumming, they came
over to talk to Bosco and Alan. Pato said that these were Brazilians who
mainly worked and lived in London. They included Mina Shimizu and Mari
Haberli who told them that they would love to be involved, but didn’t play
drums. As this was some three months before the Notting Hill Carnival, the
obvious choice, according to Pato, was to ask them to help organise the
dancers for the first parade.

Thus in August 1984, the LSS made it’s first appearance in the Notting
Hill Carnival, with the theme of “Homage to Mocidade and Padre Miquel”. It
was an historic occasion: the LSS had introduced Brazilian Carnival and
Rio-style Samba not only to the parade in Notting Hill, but also the UK.

In it’s early years, the LSS was able to introduce Samba to hundreds of
people through a series of free workshops held in the Covent Garden piazza
in 1984 and 1985. Pato said that one of the most memorable moments of the
early LSS was in 1986, when they were washed out by rain at the Notting
Hill Carnival, but still did really well, because a lot of the parading
bands didn’t perform because of the bad weather.

The formation of the LSS would later inspire the creation of numerous
other Samba Schools and Bloco’s throughout the UK, something Pato told me
he was really proud of. The LSS have also inspired many people
throughout Europe. Åke Persson, from Sweden, who first joined the LSS in
the 1985 Carnival said:

Pato was such a great person and such a great musician. He took good care
of me and others when joining the LSS in the mid eighties. I remember with
joy and pride when Pato, as a deputy mestre for the LSS, contributed in
making the 1986 Encontro in Uppsala, Sweden a success. As in Turkku, Finland in 1988
and the London Encontro in 1989.

To me and many Swedish sambistas who got
in touch with Pato, Pato was a legendary sambista and teacher in his own
life time. And I´m sure that that legend will remain. We will always
remember Pato as one of the greatest guys in the European samba scene.

After he stepped down as Mestre following the 1989 Carnival, he continued
his close involvement with the LSS, playing at every Carnival with the LSS
until 2000, and at numerous gigs, notably our first gig at the Royal
Albert Hall in 1999. He also continued doing monthly drum workshops at
Waterloo until early 2001. Another early member of the LSS, Mike Ryden,
commented:

“Pato was an extraordinary and inspirational personality. Many people
attempt to teach, few do it well, but Pato was a supreme teacher, an
effortless and charismatic communicator, yet modest, patient and entirely
unspoiled by the admiration and affection of those around him. Whether
Pato was training new players or leading the Bateria on stage, he was not
only the centre of people’s attention, he was the centre of their
emotions.

Each time you looked into Pato’s wry-smiling face, you knew he
had a special gift and teaching Samba was only part of what was happening
among you. He created for each person an atmosphere of fun, friendship,
respect, of expectations at just the right level. If we can keep that
spirit alive in our hearts, Pato’s gift will still be there, safe with
us”.

Despite his worsening illness, he came and saw the LSS off from it’s
Barracao at Maxilla Gardens just before the parade started for the Notting
Hill Carnival in 2001. Pato was overjoyed when he heard the news that the
LSS had won 2nd place, it’s highest placement, following coming 3rd in 1990.

And when the ex-dictator Pinochet was arrested on charges of mass murder
in the UK in 2000, Pato was there with many other members of the Chilean
community playing percussion on demonstrations in London that were held in
support of attempts to put him on trial here in the UK.

Pato also studied Afro-Cuban percussion at the Cuban Music Institute
“Ingnacio Cervantes” in Havana, Cuba and was the Musical Director for
combined European Brazilian Percussion Ensemble which had approximately
four hundred musicians. Pato worked extensively as a Samba teacher
throughout the UK, Ireland, Italy and other countries in Europe and also
played in numerous other Latin groups such as Grupo Folio.

He will be greatly missed by many people throughout the world – as soon as
the news came in of his death, tributes came into to us from people in
Brazil, Turkey, France and Sweden amongst others. He will always be a
inspiration to everyone in the LSS and the world of Samba.