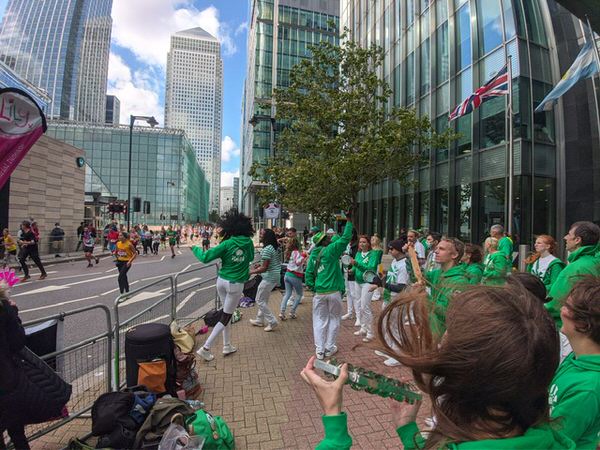 The London School of Samba performed in front of one of their biggest ever crowds at the record-breaking Virgin London Marathon on Sunday 3 October 2021.  More than 40,000 people in a range of costumes got some extra samba energy from the London School of Samba’s powerful bateria and dance rhythms as they passed under the soaring glass and steel skyscrapers of Canary Wharf to head into the final 7 miles for the finish.

London School of Samba performing at the Marathon 2021

London School of Samba has been supporting the London Marathon for over 2 decades – see a video of the LSS performance.  Many runners waved, cheered and some even stopped to dance to the sights and sounds of Rio Carnival in London!

Mestre Fred, London School of Samba Musical Director, said: “London Marathon is always one of the highlights of the year, and it’s fantastic to see so many people out running and raising money for good causes. It is lovely for us to be able to raise their spirits, put a smile on their faces and an extra energy boost along the way.”

Review of the London School of Samba at the Marathon 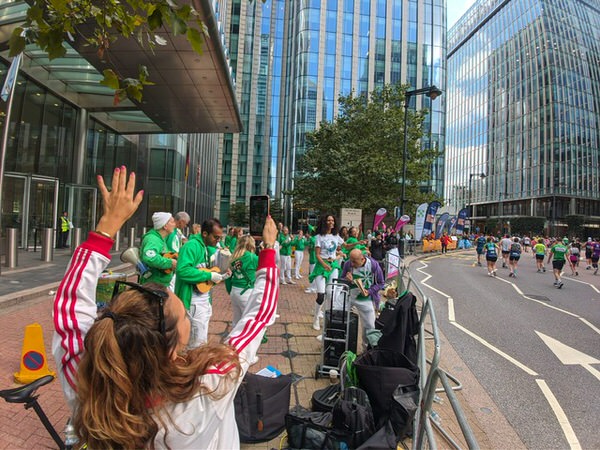 The 26.2-mile marathon, sponsored by Virgin Money,  returned to London’s streets for its first full-scale staging in more than two years. A number of changes were in force this year to try to reduce the risk of spreading coronavirus.Those running in central London had to show a negative lateral flow test for Covid-19.  We have so many people waving and cheering us on as we played to weary runners at mile nineteen at the Marathon.  Some of the runners even stopped and started to dance some samba in front of the samba band!

The London School of Samba were Fantastic!

Charlotte Buttery, who was running her first marathon to raise money for veterans’ charity SSAFA, said: “The London School of Samba band was fantastic – it’s amazing that they played for six hours straight to support us runners. Thank you for being there to give me just the lift I needed at a really mentally tough point in the race! Nothing like a samba beat to get your feet moving!”

The 2021 London Marathon was amazing!

The way people were cheering us on and dancing whilst running make it a very special day for the London School of Samba.  David McGillan a veteran of 30 previous marathons, described this year’s race as “the most special one”. Speaking to BBC news, he said: “Seeing the crowds today really restores my faith in humanity – people cheering you on when they don’t know you from Adam.”  This is exactly what the London School of Samba is all about! 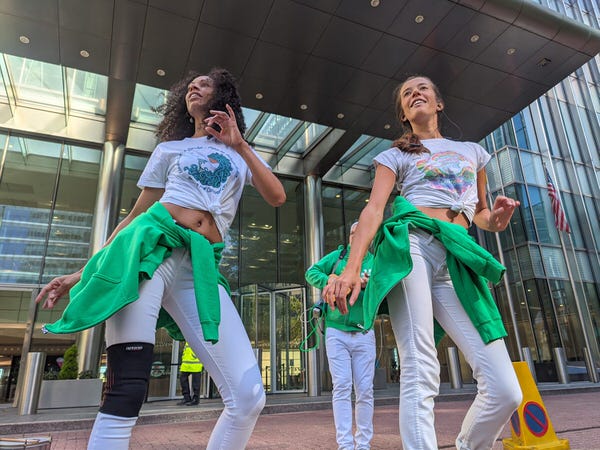 The amazing dancers from the London School of Samba really added some fire to the London Marathon this year!  Six hours of dancing to the beat of the Samba drums is so much fun!  If you saw our dancers, and want to have a go, then you are in luck!  Right now we have samba dance classes in London back open!  We offer complete beginner samba dance classes in Waterloo.  It is an amazing way to get fit, meet new friends and dance the night away!

The super fun Level 1 is perfect if you are new to samba dance in London and want to learn the basic movements and steps. This class is about having fun, fit and experiencing the joys of samba in London.  Our teachers are super friendly, and will get you up on your feed and dancing!  The classes are held every Sunday at 6pm to 7.30pm at the WAC centre in Waterloo.  The full address is the London School of Samba, WAC Centre, 14 Baylis Rd, London SE1 7AA.  We look forwards to dancing with you soon!

Love the Samba drummers at the Marathon – join our beginners class! 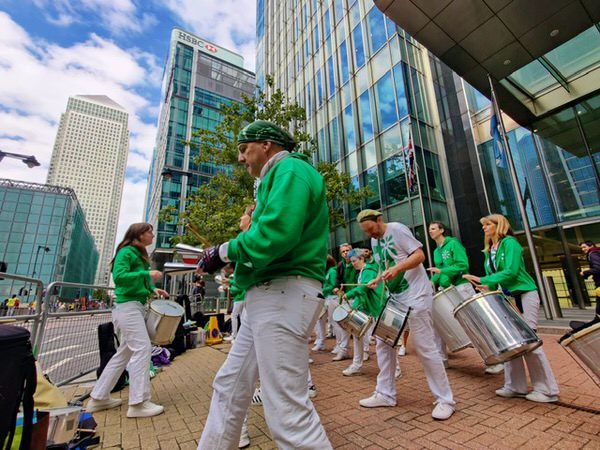 Love the sound of the Carnival at the London Marathon, then we have some great news for you!  The super popular beginner Samba drumming classes in London are back right now!  If you enjoyed the samba band at the Marathon and want to have a go, then we have some space available just for you!  These classes are suitable for absolute beginners, so come on down and give it a go!

We have some amazing super friendly teachers who are passionate about samba drumming in London.  We will have you playing a samba rhythm and getting your groove on within minutes of arriving at the class!  The samba drumming class is right after our samba dance class and you can do both classes on the same night!   For more information email our samba drumming classes at  [email protected]

25 years of London School of Samba the London Marathon 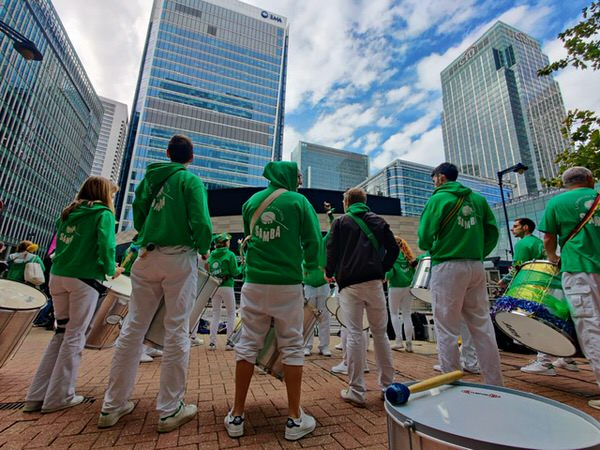 The first time the London School of Samba performed at the London Marathon was back in 1996.  It is one of the highlights of the year and all our dancers and drummers come together to bring carnival to the London Marathon.  The amount of times we have seen very weary runners slowly approaching and then suddenly find that burst of energy when they hear our drums!  The amount of smiles, high fives and cheers from the runners is a real moment of joy to witness!

The first member of the London School of Samba to run the London Marathon was Bob Garland back in 1997.  Over the years many other members have caught the bug and ran this amazing marathon through the streets of London. The school is extremely proud to have supported and performed at the London Marathon twenty five times!

Another highlight of the London Marathon this year, was Bateria Director Stacey making her debut as leader of the London School of Samba. Stacey did a fantastic job of directing and leading the big band of samba drummers to lift the spirits of the tired runners at mile nineteen of the Marathon.  Mestre Fred the current Musical Director said, “Stacey smashed it out of the park!”  Everyone loved having Stacey leading the band and the crowd loved it!

New soundsystem, two cavaquinhos and a Puxador at the Marathon! 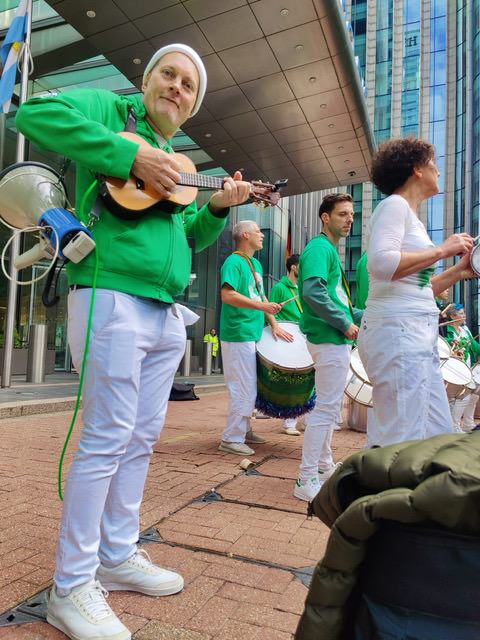 For this year’s London Marathon, London School of Samba added two guitar players and a singer to the mix!  With a with a new portable PA system on the London Marathon route, we were able to sing classic Brasilian Sambas sung in in Portuguese backed by two cavaquinhos (small four string Brazilian guitars) that are similar in size too a ukulele.  Greg Cowan, who played the cavaquinho at the gig, said: “Having a PA this year really changed the energy for both dancers and bateria, allowing us to be able to perform sambas with cavaquinhos as well as verbal cheering on individual runners with 7 miles to go on their incredible effort was absolutely amazing.”

Cavaquinhos are an essential and authentic Brazilian instrument in the samba, bringing a distinctive high pitched swinging melody line and a rhythmic chord backing to the vocals which accompany sung Sambas like “samba de Enredo” (stories / anthems) and samba songs; “sambas de canção” – these are two kinds of Brazilian samba we play, besides batucada, at London School of Samba.

Cavaquinhos have been part of the school since its beginnings in 1984, especially for accompanying the annual Notting Hill Carnival samba enredo song. The cavaquinho originates from (Braga) Portugal and blended – with Portuguese culture, slavery and anti-slavery resistance culture – into Afro-Brazilian culture. The samba music of resistance to slavery incorporates global influences.

Having the new soundsystem, the two cavaquinhos and a singer was one of the highlights of the year’s marathon.  It allowed us to add even more energy and excitement of a Rio carnival to all the runners as they passed us at mile nineteen.  This year was a special year for the London School of Samba, and we look forwards to seeing you next year at the London Marathon.

Results for the London Marathon 2021

The race is famous for the amount of amateur runners it attracts, many of whom run in fancy dress in aid of charity.  Here are the results from the Virgin Money London Marathon 2021.  Marcel Hug and Manuela Schar won the wheelchair races in course-record times.  Sisay Lemma and Joyciline Jepkosgei won the elite races.

The slowest ever finisher at the London Marathon