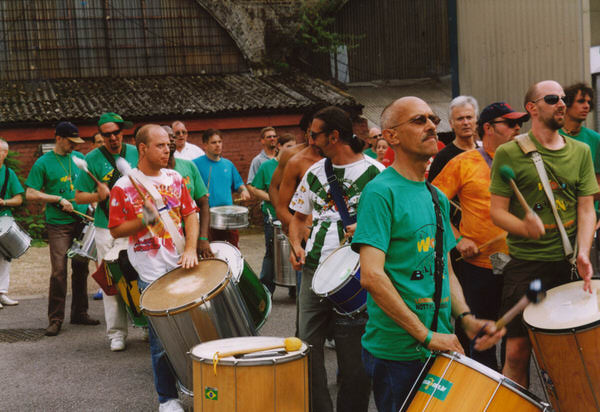 Lionel Sims Obituary (1945-2021).  We have very sad news to report that the sambista Lionel Sims, one of the founders of the Barking Bateria, and a long-serving member of the London School of Samba has died.  Mestre Mags wrote this obituary on his Facebook page to pay respects and to Lionel.

Thank you to Mestre Mags for writing this post on Facebook.  Many of the comments from the post mention Lionel Sims and what a great person he was.  Patrick Wilson from both Barking Bateria and London School said the following.  “So sorry to hear – Lionel Sims was a great teacher, colleague and friend, and along with Chris and Fred looked after me as a beginner at barking Bateria, on many marches & demos and great communal times at Stonehenge. Lots of love” 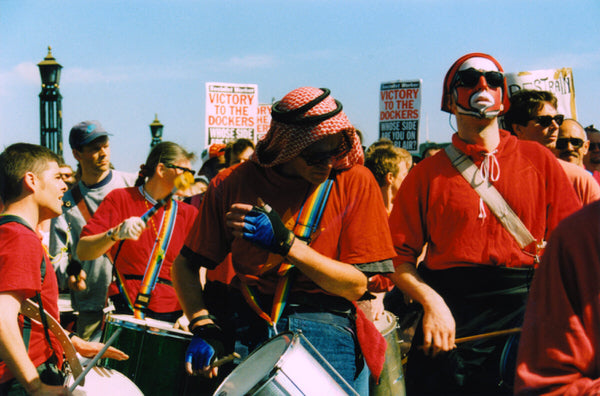 In the early to mid-1990s, Lionel Sims had seen Batucada Mandela play on the streets with Chris – probably at one of the anti-racist marches through Hackney. Batucada Mandela was an offshoot of the London School of Samba formed by Alan Hayman, Pato Fuentes et al to take in political marches and protests around 1985, notably the 24h non-stop picket outside the South African Embassy.

Along with Chris Knight, he was a senior lecturer in anthropology for many years at the University of East London.  After seeing Batucada Mandela protesting in the streets both Lionel and Chris were inspired to form their samba group in marches and protests called the Barking Bateria.

Barking Bateria was formed by Lionel and Chris

Barking Bateria adopted the same colours as Batucada Mandela – red & black.  Within a short period, they began to invite London School of Samba members to participate in their gigs. Increasingly, many of their members started coming to the LSS – notably our first female bateria director of the school Viky Mayer and future Mestre, Fred Turuka – amongst many others. The group also allowed Mestre Mags to learn more about how to direct and teach a bateria.

A short film that features the Barking Bateria led by Mestre Mags playing in Liverpool Street Station on the day of the Carnival against Capitalism (J18 – 18th June 1999).

Lionel gave me the opportunity to lead Bateria

Thanks to Lionel Sims, Mestre Mags got his first opportunity to lead a bateria at a gig.  This was when the Barking Bateria played in support of the sacked Liverpool Dockers at the Conway Hall Holborn in April 1997.
I began leading workshops at the Barking campus around this time and later, he also asked me to lead the group at the Carnival against Capitalism in June 1999.

This was one of the most memorable musical experiences of my life – as here we appeared out-of-blue in the middle of Liverpool Street station to play on the main concourse – to much applause and support from commuters – something unthinkable today.

He also allowed me twice to lead the Barking Bateria in the late 1990s in marches to remember the massacre of civil rights protestors at Bloody Sunday in Derry in 1972 – when we paraded to Kilburn in 1999/2000. The last one had some unnerving experiences as far-right demonstrators attempted to confront the march – right in front of the bateria. Fortunately, they quickly dispersed after many on the march made it clear they wouldn’t allow that to happen.

Finally, he invited me to lead the Barking Bateria at another unforgettable gig – to play samba in the middle of Stonehenge when the sun rose on a midsummer day in 2000. On this trip, Chris and Lionel also arranged for us to visit the stone circle at Avebury, which was another special experience.

Lionel invited me back to teach at Barking Bateria

All these opportunities gave me the confidence that l needed when l was asked to become the director of the bateria at the London School of Samba in 2000. In 2009, it was Lionel Sims who also kindly invited me to come back and teach in Barking. So many great, inspiring, and happy experiences were so important to me personally and greatly helped my development as a bandleader and musician in those early days.

I also greatly admired and respected his historical research into Stonehenge and Avebury. He contributed greatly to a much wider understanding of the origins of Stonehenge and his name features on a programme shown on TV called Stonehenge Rediscovered that was shown at least twice on British TV.

Lionel also contributed greatly to the LSS – taking part in 9 parades with the school at the Notting Hill Carnival and being an active and regular player in the bateria since Dave Willetts was director. I remember him as always a very positive and encouraging person in the bateria, who was always there to play gigs – even when the Barking Bateria were really busy. He also stepped up to help the school at a crucial time and took up a post on its Management Committee (now called OMT). He was a great supporter of the school and made a substantial contribution to its success.

He was a special person and will be missed

He was a really special person and l will greatly miss him. Sincere condolences to his family – especially daughters Carmen & Danielle who also played with the LSS on many occasions.
Thank you Lionel Sims rest in peace and enjoy your journey through the stars