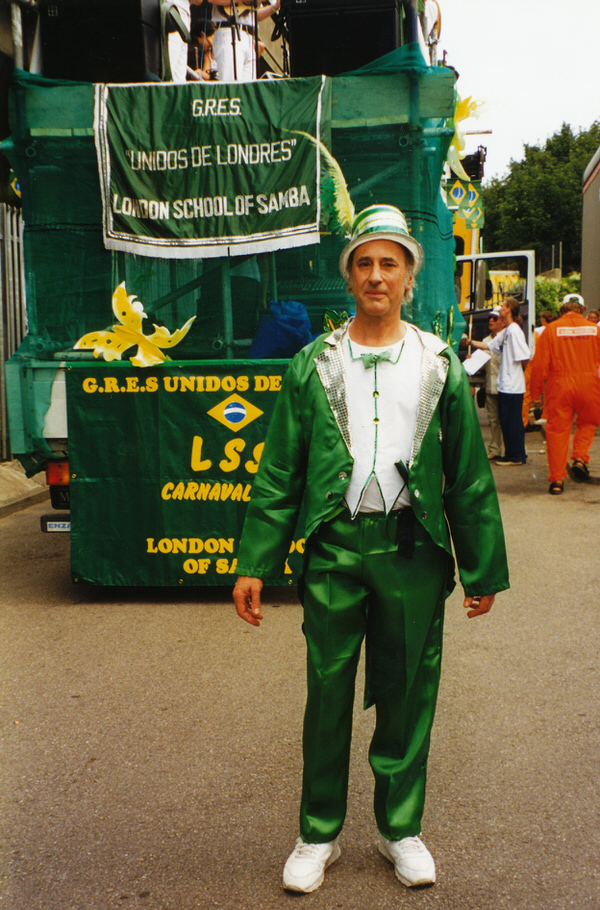 It is with considerable regret and sadness that I announce the death of long-serving London School of Samba member & Trustee Paul Marwood – who died of Colon cancer on November 20th. Recently when I was worried that I hadn’t heard from him for some time, I checked our Whatsapp messages and noticed he hadn’t looked at it since October 28th. So, I sent him a brief message on 17th November asking if he was OK. As he didn’t reply, I called at his flat in Peckham on 19th November 2020.

There was no response to his front door bell but it was here that I met his neighbour who told me that he was in hospital and that he hadn’t been well, having collapsed one day (a month or so earlier) outside his flat. I informed the Trustees and just thought that he’ll probably get out soon. Little did I know that he was to die the following day. I wish I’d known where he was as I would loved to have seen him just before he passed away, but of course, with CV19 etc that probably wasn’t possible anyway. Even so, hearing of his death today it came as great shock as we have lost a long standing and dedicated member of the school.

Paul Marwood great loss to the London School of Samba 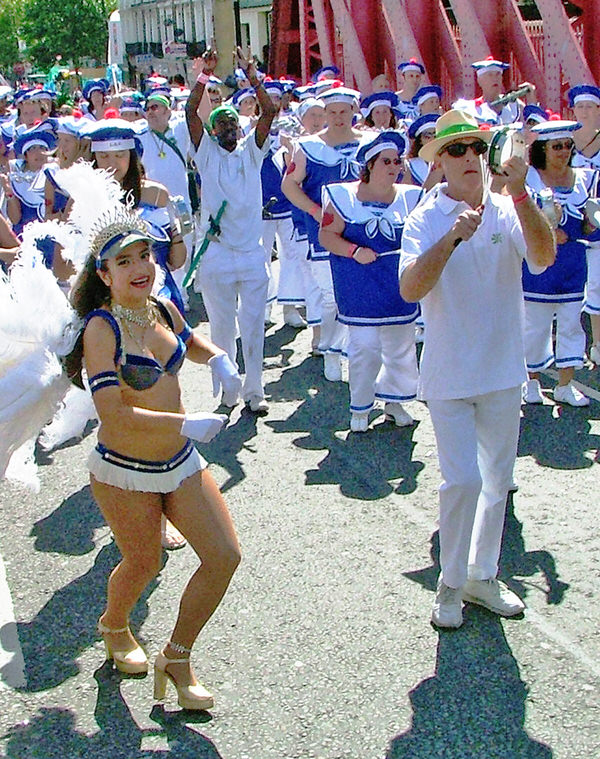 I can say without hesitation that Paul’s passing is a great loss to the London School of Samba. He had always been an extremely enthusiastic member of the bateria – someone you could depend on to be there, especially the gigs which were hard to get people out for. He had also been tireless worker behind the scenes as a Trustee since 2012 and in recent years as part of these duties had always been at WAC making sure there was someone to open up and organise someone on the door for the dance and drum workshops.

A skilled painter and decorator by trade, he often worked restoring old murals and paintwork in churches and old buildings, and enjoyed showing members of the bateria photos of this on his phone. I could see from these that he had great skills in this area. He brought those skills to the LSS, helping the school countless times on our float designs for our parades at the Notting Hill Carnival.

Paul was born on 28th of December 1948 in Southhampton

In February 2015, Paul told me a bit about his family background. He said he was born on 28th December 1948 and grew up in Southampton, where he became close friends in the 1970s with Dave Renshaw, who later would be one of the founders of the samba group BAT2K. This is what he told me of his family:

“My father was Blackshirt before WW2 – a supporter of Oswald Mosley who hated Blacks, Jews, Gays etc and said that Hitler should have won the war. I  fell out with him and ended up never speaking to him as his views were just too extreme. My father ended up moving to South Africa with his family, taking my brothers and sisters there. I visited there in 1974 and could not believe how the black majority were living. I saw with my own eyes the reality of the apartheid state which my own parents endorsed. I did some building work there and got friendly with some Zulu builders – who kept on insisting on calling me “boss” – despite my request not to.

I went back to their township – despite being stopped by black policemen and told I could not go. I just got into the boot of the car and carried on the journey. When I got to the township in Natal and walked into the bar – the whole place went quiet – but then everyone was really friendly. After this time, I lost contact with his family. By 2015 my mother and father were dead, but I still had brothers and sisters in South Africa – but I was no longer in contact with them.

My mother was of Portuguese aristocratic origin – her grandmother was from Portugal, from the area of Coimbra. Her family were rich landowners who fled the country after the revolution which deposed the constitutional monarchy and established a republican regime in Portugal in October 1910. They came to live in England – so I am really a mixture of British and Portuguese origins”.

The Southhampton School of Samba

He ended up back in Southampton and here as noted above he met Dave Renshaw. The group they formed was the first samba band in this part of England and they named it the Southampton School of Samba. This was sometime in the early 1990s and they got in Sam Alexander to help set the group up. Eventually after the group was done, it was renamed BAT2K and they made contact with the LSS. This led to numerous members over the years coming to take part in our parades at the Notting Hill Carnival every year. It was this connection with the Notting Hill Carnival that Paul told how he’d first made contact with the LSS.

In recent years, Paul had become a special person for me in the school because he had become the last person left from all those who’d been in the bateria in the mid-1990s. For the last decade of so, I had felt great affection for him for all the time and work he’d put in for the LSS.

I remember when he first joined in bateria in 1994 – 26 years ago. By this time, he had moved to London and almost straight away began to be as involved as much as possible with the LSS. His first parade with the school in the Notting Hill Carnival was in 1995 and he did every carnival since then – a total of 25 parades between then and the last one the school did in 2019.

I appointed him to be the head of Tamborim section in 2001 – a post he held for several years with real dedication. He helped me write the tamborim arrangement for the 2003 samba de enredo (Orfeu em Notting Hill), and was a bateria director in the Notting Hill Carnival for 15 years (2002-2015). After that just came out as a steward and helped out over the Carnival weekend wherever work was needed. 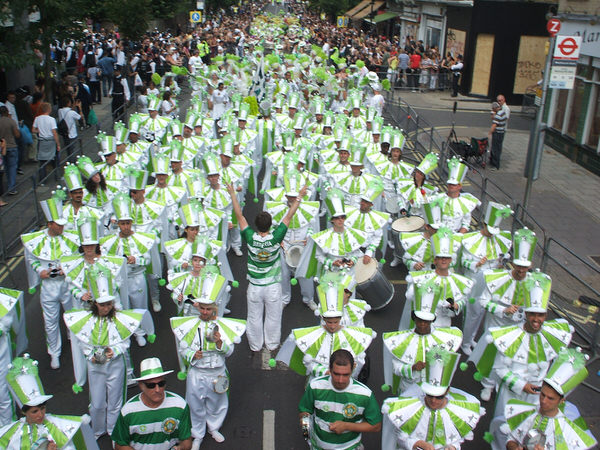 In the Notting Hill Carnival, he had played a crucial role in some of our recent victories: In 2006, he led the tamborim section when we won the samba category for the first time, using effective choreography in front of the judges. This was when the bateria were dressed as sailors (All aboard the LSS: Uma Viagem Através do Mar de Londres a Brasil). As a painter and decorator, he also helped with our floats many times in these years. Because of this in 2017, as Chair of the Carnival Committee I asked Paul to see if he could decorate the single float we had for the parade.

Paul taught the school a very simple lesson that I hope we will never forget: he simply covered the scaffolding on the float with a cheetah style covering. It worked and i’m sure it helped us in our stunning victory that year – when we won Carnival for only the second time in our history.

He commented several times afterwards that it we had won the carnival without any big elaborate floats. He also felt that he had provided the school with a very good example of what can achieved with very limited resources, money and time. His work for the construction of the float that year should be remembered as what can done in a carnival when the school doesn’t have much money, time or people to do a float design.

Paul was on the first LSS trip to Coburg in 2001

I remember him being there when I first took the bateria to Coburg in 2001, and he came on many of our overseas trips to see our samba friends in France (Aquarela), Spain (Bloco do Baliza) and Sweden (Samba de Sousa). He also took part in at least one parade with Imperio do Papagaio in Helsinki in 2015. He was also in Novi Sad in Serbia in 2015 as well, playing with many other European ritmistas in a bateria led by Chris Quade Couto. He linked up there with an old friend of the LSS, former member Dushan Bijanic, who lives in the town and went over with some other old LSS members.

When I played in the carnival in Rio in 2001 at a crazy time in the morning (we started at 7.30am), I remember looking up from the bateria as we paraded down the sambadromo and seeing Paul standing there watching me and clapping in a virtually empty arena. He also enjoyed taking part with Mestre Esteves and Beto Domingos with the parade of the Bloco do Sao Carlos that happens just before Carnival in the area of Estacio.

He was also part of the schools Vehla Guarda, having served more than enough years to be a member and took part on the committee to help organise the 30th anniversary party at the Conway Hall. He also helped me out considerably with preserving the history of the school and allowed me scan in back in 2009 some 2300 pictures that he’d taken up to then. In time, the best of these will be on the London school of Samba Historical Archives website that I have set up on Flickr.

Paul gave everything to The London School of Samba

In my 30 years as a member I have seen that the school has greatly benefitted from the sheer dedication and hard work of a relatively small group of people. These are people like Paul (and Di Foden also comes to mind) – who worked flat out to ensure the schools survival in harsh times and have put themselves forward as volunteers for years upon end. I hope that in the future it will not continue to be a small group of people – but that the members will realise that more must be involved to share the load of all the volunteers, as this is the only way to ensure the continuity of the school. People like Paul worked hard to make sure has always had people keeping it ticking over, not just from year to year, but from decade to decade.

Paul loved LSS and was totally dedicated to the school

He loved the school and was totally dedicated to it, and ended up giving a quarter of century of service to the school. He was one of the people who truly helped make the school what it is today and did what he could to ensure it got through its toughest moments. His service as a volunteer is an example to all, and what the school urgently needs now. Thanks for everything you did for the school Paul, you’ll be greatly missed by so many people.

Below we are honouring the past members of the London School of Samba and we say farewell to so many wonderful friends.  Everyone past and present at this Samba School send their love and condolences to your families and thank you for enriching our lives.